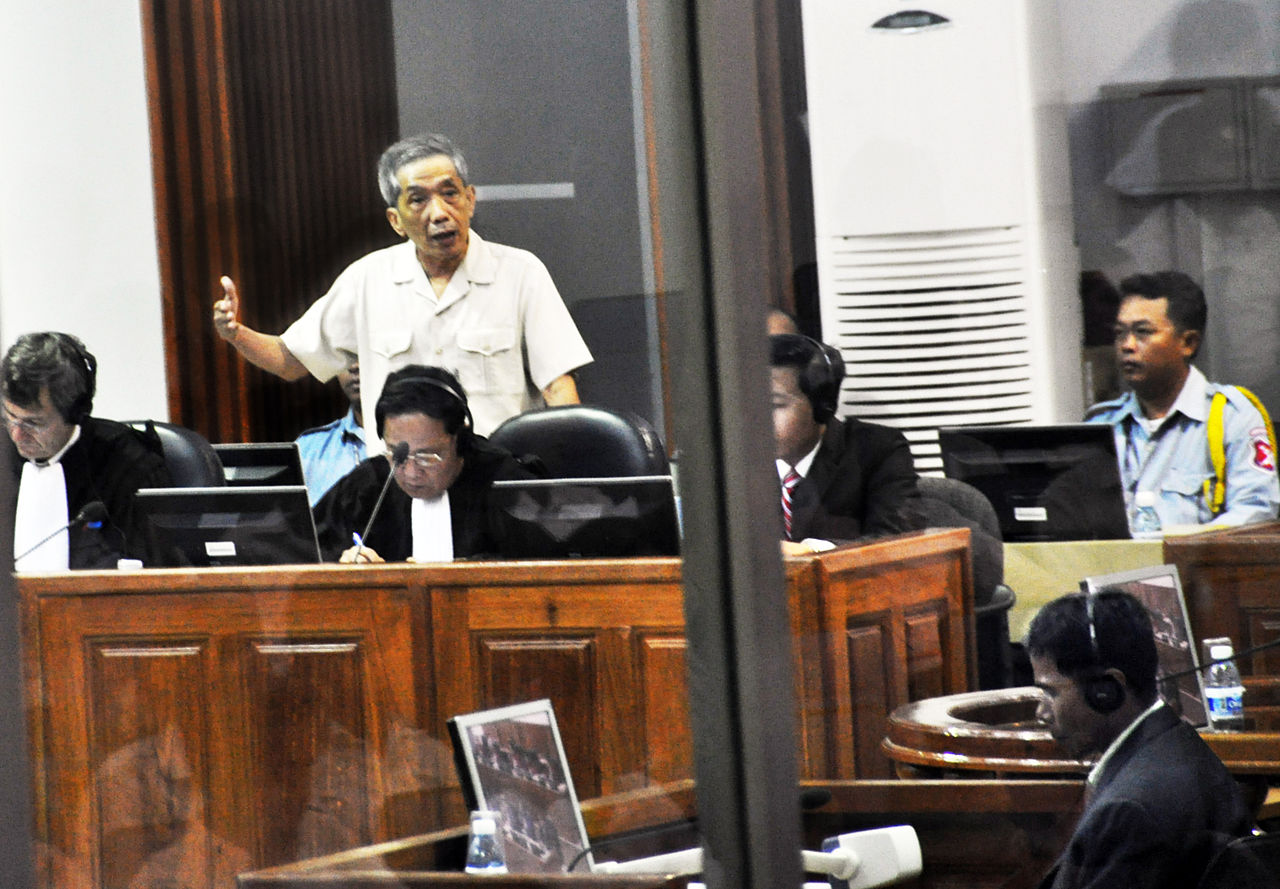 Comrade Duch died yesterday, on 2 September. He ran the notorious Tuol Sleng prison during the genocidal reign of the Khmer Rouge in Cambodia and was responsible for at least 14,000 deaths. His birth name was widely reported as Kaing Guek Eav, following the spelling used by the Extraordinary Chambers in the Courts of Cambodia which announced his death. Back in 1999 however, when his identity was exposed by journalists Nic Dunlop and Nate Thayer, the Far Eastern Economic Review article that broke the story used the spelling Kang Kek Ieu. Thayer wrote:

Kang Kek Ieu’s name is usually spelled “Kiang” by scholars, but in his interviews with the REVIEW, he said he writes it as Kang.

It is not clear whether he meant “Kaing” instead of “Kiang”, but if the latter is a misspelling it is a common one; “Kiang Guek Eav” and “Kiang Kek Iev” do get a few hits. The English-language Wikipedia opts for Kang Kek Iew, while Kaing Kek Iev is also quite common.

Even the spelling of his name in Khmer, the official language of Cambodia, does not seem to be universally agreed upon. One can find his name given as either កាំង ហ្គេកអ៊ាវ or កាំង ហ្កិច អ៊ាវ. According to the UN romanization system, the former corresponds to Kăng Hkék′éav and the latter to Kăng Hkĕch Éav. Here, the combination hk (written ហ្គ or ហ្ក) is meant to represent the sound [ɡ] in loanwords from French and other languages, so we could reasonably render the name as Kăng Gék′éav or Kăng Gĕch Éav instead. Based on the spelling-to-sound correspondences usually given for Khmer, we can surmise that these spellings represent something like [kaŋ ɡeik ʔiəʊ] and [kaŋ ɡec ʔiəʊ] respectively (although there naturally is no single fixed standard pronunciation of Khmer). The presence of a spelling to indicate the foreign sound [ɡ] gives a clue that this is not a native Khmer name. Khmer speakers that do not have this sound probably use [k] instead, accounting for romanizations such as Kang Kek Ieu.

Like many prominent Cambodians including Pol Pot and Hun Sen, Kang Kek Ieu is of Chinese descent. Pol Pot however was of mixed Chinese and Khmer heritage and did not speak any Chinese; neither his nom de guerre nor his birth name Saloth Sâr looks very Chinese. However, Kang Kek Ieu does look very much like a typical Chinese-style name. This led me to wonder what the original Chinese name could have been. I thought I might be able to figure it out through some guesswork using my familiarity with Chinese characters through Sino-Korean.

The majority of Cambodians of Chinese descent are of Teochew origin. These are speakers of a variety of Southern Min Chinese traditionally spoken around Chaozhou and Shantou in China’s Guangdong province. Teochew is an alternative name for Chaozhou based on the local pronunciation of 潮州 (Cháozhōu in Mandarin), which can be written Tiê-tsiu or Tiô-tsiu if we use a system similar to the Pe̍h-ōe-jī romanization used for the mainstream varieties of Southern Min usually known as Hokkien outside Mainland China. While there is also a pinyin-like scheme published by the Guangdong Provincial Education Department in 1960 to romanize Teochew, I will stick to the Pe̍h-ōe-jī-style romanization here to make comparisons with Hokkien easier. Teochew was also traditionally the lingua franca of the ethnic Chinese community in Thailand, although today most ethnic Chinese speak Thai exclusively.

The ethnic Chinese in Cambodia arrived in multiple waves throughout history from different linguistic backgrounds, but Kang Kek Ieu’s family is said to have migrated there in his father’s generation. As there was a large-scale migration of Teochews to Cambodia in the 1920s and 1930s, it seemed like a good bet that his family had this background as well. So I proceeded on the hypothesis that his name came from Teochew.

Teochew is mostly an exclusively oral language, as are indeed most Sinitic varieties today apart from Standard Mandarin and to a lesser extent Cantonese. There are plenty of morphemes used in Southern Min that cannot be readily written with Chinese characters. However, at least when it comes to naming people, Teochew speakers will choose names that can be written in Chinese characters and will pronounce them according to the Teochew readings of those characters. Speakers of other Sinitic varieties such as Mandarin, Cantonese, or Hokkien will all use their own readings of these same characters, which is why it makes sense to call them Chinese names even if there is no unitary spoken language called Chinese. So my objective was clear—I would try to find three Chinese characters whose Teochew readings would match the Khmer rendering of the name and would also be plausible as a Chinese name.

I saw that the Chinese-language media was calling him 康克由, which would be Kāng Kèyóu in Standard Mandarin and Khang Khiok-iû [kʰaŋ˧ kʰiok̚˨ iu˥] in Teochew. However, the more I looked into it, the more it seemed to be a post hoc rendering of the romanized Khmer name into Chinese characters rather than a reflection of the actual etymology. It utterly fails to match the consonants in Khmer, as the unaspirated [k] of Kăng and the voiced [ɡ] of Gék′éav/Gĕch Éav are both mapped to an aspirated [kʰ] in Teochew as well as in Mandarin.

Assuming that Kăng was the surname, I figured that it was more likely to be 江 which is Kang [kaŋ˧] in Teochew and Jiāng in Mandarin (as in Jiang Zemin). The choice of 康 Kāng by the Chinese-language media is explained by the similarity to the romanization Kang or Kaing, but it is the Teochew initial of 江 that actually matches the unaspirated [k] in Khmer.

Furthermore, the use of ហ្គ or ហ្ក in the Khmer name, combinations only used to represent the [ɡ] in loanwords, was surely a meant to represent this very sound in the original. Voiced stops are very rare in Sinitic varieties—pinyin g and k actually represent [k] and [kʰ] respectively in Mandarin, both voiceless sounds. But voiced stops are found in Southern Min, including Teochew, lending further credence to the Teochew or at least Southern Min hypothesis for the origin of this name.

An initial [ɡ] in Southern Min usually corresponds to an initial [ŋ] in Middle Chinese. This meant that the character I was looking for would probably have a zero initial and a final [k] in Sino-Korean. I soon discovered that 玉 meaning ‘jade’ and pronounced Yù in Mandarin (as well as having the Sino-Korean reading 옥 ok) is pronounced Ge̍k [ɡek̚˦] in Teochew (ironically, 獄 meaning ‘prison’ has the same pronunciation). I tend to associate this character with feminine names in Sino-Korean, but I found plenty of examples of this element being used in the Chinese names of men such as Hui Liangyu, Fei Yu-ching, Xue Yuyang, Wang Yu, and the Taiwanese Hokkien singer Tan Kun-giok (Gio̍k is one of the pronunciations of 玉 in Hokkien). Indeed, upon reflection, the character also appears in the Sino-Korean names of men such as Chough Pyung-ok and Shin Sang-ok. As there seemed to be relatively few characters pronounced this way in Teochew, it seemed more and more likely to me that Gék/Gĕch was meant to represent 玉.

While reading up on Cambodian names, I saw that អៀវ Iĕv [ʔiəʊ] was a Khmer surname deriving from Teochew 楊 Iôⁿ [ĩõ˥] meaning ‘willow’ and wondered if this could also be the source of អ៊ាវ Éav [ʔiəʊ], which is pronounced identically in Khmer (although at least one paper distinguishes the pronunciations of iĕ [iə] and éa [ie]). Malaysian actor Michelle Yeoh (Choo-Kheng) whose Chinese name is 楊紫瓊 or Iôⁿ Chú-khêng in Hokkien spells the same surname in an English-style romanization as Yeoh, ignoring the weak nasalization of the original, and the same happens in Khmer. However, many other characters are also pronounced Iôⁿ in Teochew such as 洋 meaning ‘ocean’ and 溶 meaning ‘flowing’. Moreover, Éav could easily be an approximation of an altogether different pronunciation in Teochew.

One character that came to mind was 耀 iău [iau˧˥] or iŏu [iou˧˥], meaning ‘radiance’, as can be found in the name of the Singaporean politician Lee Kuan Yew whose Chinese name was 李光耀 or Lí Kong-iāu in Hokkien. Sure enough, when I searched for 江玉耀, I immediately found a number of results confirming that this was the original Chinese name of Kang Kek Ieu, including the following excerpt from an English-language abstract:

One such killer who fits this description is Kaing Kek Iev (កាំង ហ្គេកអ៊ាវ, aka. 江玉耀Jiāng Yùyào, or more famously, “Comrade Duch”) …

The nom de guerre usually romanized Duch or Douch is written ឌុច Dŭch in Khmer. The pronunciation would be [ɗuc~duc] where the final consonant is a unreleased palatal stop [c̚], although it appears that in many similar words the vowel may be a bit lower (e.g. ជុច chŭch [cʊc] [cɔc] according to the Khmer Pronouncing Dictionary). The sound d in Khmer seems to be variably pronounced as an implosive [ɗ] or the regular [d], with the latter favoured in educated speech. A reasonable approximation in English would be to rhyme it with ‘look’ as [dʊk]; it would be inappropriate to pronounce it like ‘Dutch’.