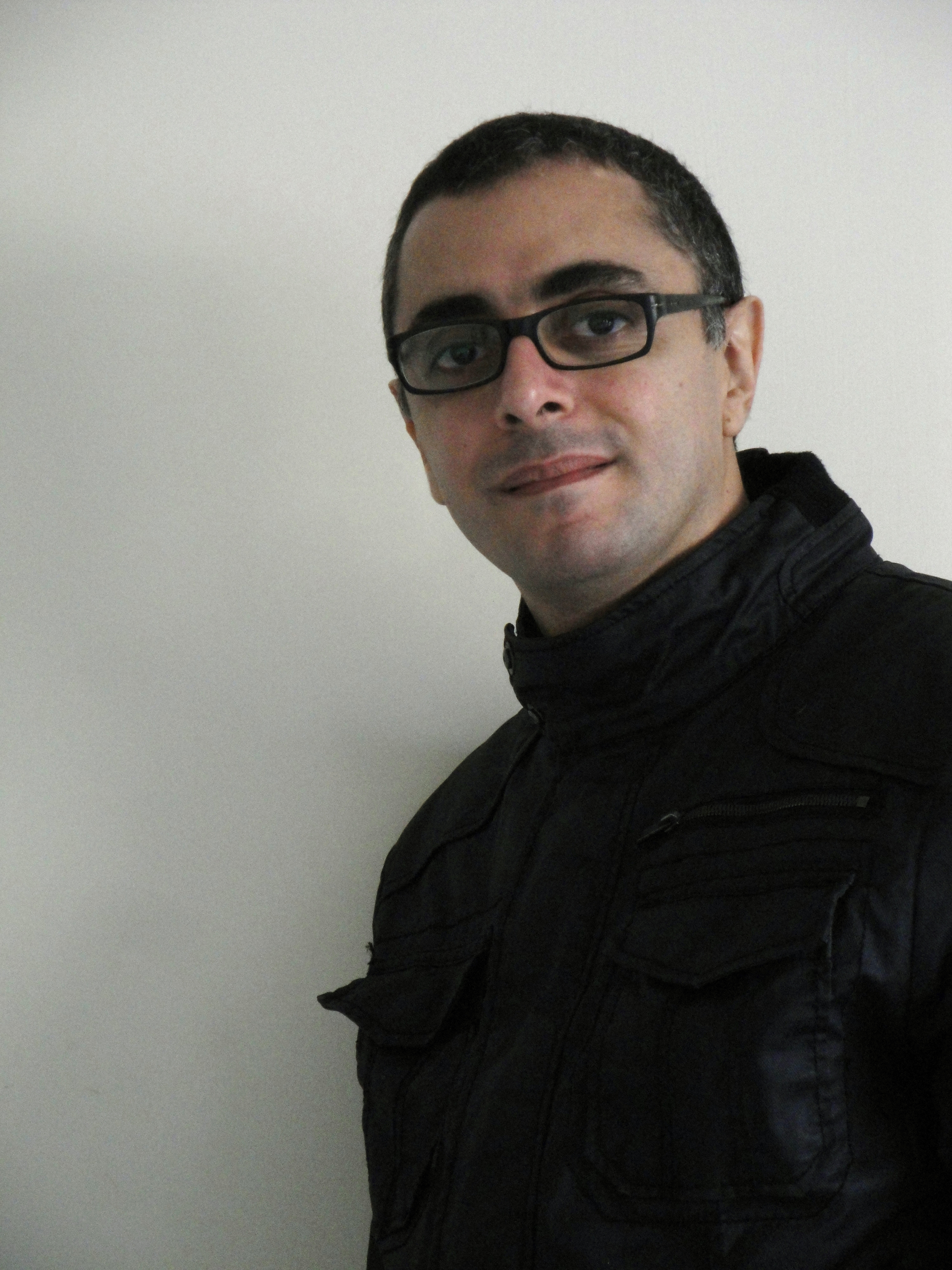 Ricardo Mbarkho, born in Beirut in 1974, is a Lebanese visual artist working in digital images and video whose unusual name immediately leapt to the eye.

It is not unusual to see Lebanese individuals with European given names, but these tend to be French or English; Ricardo is the Spanish and Portuguese form of Richard, ultimately a Germanic name from Proto-Germanic *Rīkaharduz. However, the really eye-catching part is the surname Mbarkho. It doesn’t look like an Arabic name, even considering the fact that unlike Modern Standard Arabic, Levantine Arabic (the most common everyday language in Lebanon) allows initial consonant clusters.

I guessed that Mbarkho might be Aramaic in origin, like that of many place names in the Levant, and specifically its classical form Syriac. Aramaic was once the lingua franca of the entire region, a status it has surrendered to Arabic following a centuries-long language shift that started with the Arab conquests of the 7th century. Today, Western Neo-Aramaic, representing the branch of Aramaic traditionally spoken in the Levant, only survives in three villages in the mountains of Syria, spoken by a mere 24,000 according to a 2014 estimate.

The Eastern branch of Neo-Aramaic which developed in Mesopotamia (chiefly northern Iraq and adjoining areas of Syria, Turkey, and Iran) has many more speakers today, perhaps up to a million. Most are Christian, commonly self-identifying as Assyrian or Chaldean depending on their denomination. These communities have a significant diaspora presence in Lebanon, especially due to the recent wars in Iraq and Syria. There are also smaller numbers of Mandaean and Jewish speakers of Eastern Neo-Aramaic.

Syriac, the classical form of Middle Aramaic which began to be used as the language of worship in the 3rd century, is today used as the liturgical language not of just the Eastern Neo-Aramaic speakers but also of many Lebanese Christians that speak Arabic as their everyday vernacular. Syriac is used by the Maronite Church, the biggest Christian denomination in Lebanon, as well as by the smaller Syriac Catholic and Syriac Orthodox Churches, though not by the Greek Orthodox or Melkite Churches, the second and third biggest Christian denominations respectively. As a legacy of a split in Eastern Christianity in the 5th century, the Maronite, Syriac Catholic, and Syriac Orthodox churches use a Western form of Syriac that is slightly different from the Eastern form used by the Assyrian Church of the East and the Chaldean Catholic Church.

A 2007 video work by Ricardo Mbakho is titled Arameans. Aramean is a self-designation favoured by some Western Syriac Christians to stress the connection with the ancient Arameans, the original speakers of Aramaic who came from what is now Syria.

Mbarkho seems to come from ܡܒ݂ܰܪܟ݂ܳܐ mḇarḵā, which means “blessed” in Syriac (see this entry). You can find instances of this word being written “mbarkho” in ad hoc romanizations of Syriac prayers. Originally, this would have simply been written ܡܒܪܟܐ mbrkʾ, as a string of the letters mīm ܡ, bēṯ ܒ, rēš ܪ, kāp̄ ܟ, and ʾālap̄ ܐ written from right to left (the isolated forms of the letters can look different from the connecting forms). This would be written 𐡌𐡁𐡓𐡊𐡀 in the older Imperial Aramaic alphabet and מברכא in the Hebrew alphabet, which was used to write the Aramaic portions of the Hebrew Bible. The letter ʾālap̄ originally represented the glottal stop ʾ /ʔ/, but also came to represent the vowel ā in a practice called mater lectionis (from Latin “mother of reading”) just as in the Arabic alphabet.

Because the pronunciation of strings of these basic letters such as mbrkʾ is ambiguous, various systems of diacritic marks have appeared to indicate the vowels and to differentiate certain consonant pronunciations. The spelling ܡܒ݂ܰܪܟ݂ܳܐ with such marks is used to indicate the pronunciation mḇarḵā in one such system widely used in the Western form of Syriac. Over bēṯ, a miniature Greek capital alpha (Α) indicates the vowel a, and over kāp̄, a miniature Greek small alpha (α) indicates the vowel ā. While a is pronounced [a] in both Eastern and Western reading traditions of Syriac, ā is pronounced [ɑ] in the Eastern tradition and [o] in the Western. In turn, Western Syriac pronounces original o (pronounced [o] in Eastern Syriac) as [u], merging it with original u. A Western pronunciation of mḇarḵā would explain the romanization of the final vowel as “o” in “mbarkho”.

The dots under bēṯ and kāp̄ indicate that they have the “soft” pronunciations [v] and [x] respectively instead of [b] and [k], which would be indicated by dots above the letters. Early on in the history of Aramaic, the original stops /b/, /p/, /d/, /t/, /ɡ/, and /k/ went through conditional lenition when they came after a vowel (unless they were geminated /bb/, /pp/, etc.), becoming fricatives [v], [f], [ð], [θ], [ɣ], and [x] respectively. This seems to have influenced a similar development in Hebrew, which is why bēt ב and kāf כ can represent both soft [v] and [x~χ] and hard [b] and [k], though in Modern Standard Israeli Hebrew soft versions of /d/, /t/, and /ɡ/ are not used.

However, the fact that short vowels in unstressed syllables ultimately disappeared in Syriac makes it difficult to know for sure which instances of non-initial original stops should be pronounced as a fricative. The ḇ and ḵ in mḇarḵā certainly do not come after a vowel, but they are both soft. But looking at the Arabic cognate مبارك mubārak “blessed” or the Hebrew בָּרוּךְ bārûḵ “blessed”, it seems plausible that there were originally vowels before the ḇ and ḵ in Aramaic that were eventually elided, but not before turning the following stops into fricatives.

Based on the available descriptions of Western Syriac, mḇarḵā would be pronounced something like [mvarxo]. One may therefore expect a romanization like “mvarkho”. Then why do we see “mbarkho”? It may be due to a pronunciation influenced by the vernacular, be it Neo-Aramaic or Arabic. Not all the Syriac lenitions are maintained or reproduced in the different languages and dialects of Neo-Aramaic, and Syriac ḇ actually merges with w as [ɥ~w~ʋ] in many varieties rather than being pronounced [v]. And even those varieties that split the original b might not have the soft version everywhere that Syriac has it, maintaining a hard b after m in words similar to the Syriac mḇarḵā.

However, the simplest explanation here may be that Arabic, the predominant vernacular language in Lebanon, does not have [v] as part of its sound inventory except as a marginal phoneme in recent loanwords. There is no letter to represent it in the usual Arabic alphabet. The article on the artist on the Arabic version of Wikipedia currently spells Ricardo Mbarkho as ريكاردو مباركو Rīkārdū Mubārkū, where both b and k are written as if they are hard (I have supplied the vowels here according to the phonotactics of Modern Standard Arabic, but Levantine Arabic pronunciation might be closer to Mbārkō). However, the spelling used on Mbarkho’s own YouTube channel is مبارخو Mubārkhū (or Mbārkhō), where the fricative pronunciation of ḵ is indicated using the Arabic ḫāʾ خ, romanized kh [x~χ]. In articles in Arabic where he is mentioned, one can even see Mbarkho written as مبارك Mubārak, identical to the cognate Arabic name, perhaps in recognition that it is equivalent to the Syriac Mḇarḵā.